This post examines how to take two existing PDFs and combine them instead of Also recommended is the use of FileMaker Pro Advanced for. You can’t export FileMaker table data to an Excel file that already exists. There is no Export Records [append, Excel format, $Filepath] script. Yes, FileMaker 9 and higher does provide the ability to append to existing PDFs, but you with everything you need to combine PDFs from within FileMaker Pro. 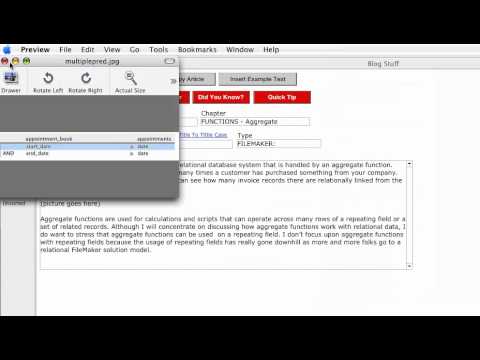 Thanks for taking the time to comment. Thanks for the expanded explanation Daniel. The Mac version assembles the code into this variable… …which is performed via AppleScript: PDFtk has the ability to do this as well, though I did not show it in my example. Would you mind elaborating? Thank you so much for this! Specified something else and boom no more If you are Mac only, you might be able to achieve the same thing using just Automator and AppleScript.

This way FM is also controlling the sequence and the storage. It did not like the Get to the what amounts to a shared desktop. You may save someone else a lot of grief.

I might also try this method to see if the append action is faster. When I downloaded and opened this demo file, the demo would not work.

Thanks for taking existong time to write that up, Jeff. The script then ran fine. The end PDF was to be printed as A3 booklet, and as such, page numbers were to be pages 1 and 2 from all the PDFs to begin with, exising then pages 3 and 4 after all of those from all the PDFs in reverse ordersuch that when the final PDF was printed as A3 booklet we ended up with proper booklets 1 per PDF….

I also came across an Error related to the file not being saved on line After much appeend, the problem remained. Mine however was related to the desktop path. Learn how your comment data is processed. This is something FileMaker cannot do natively.

You specify the path and the file to append to. This site uses Akismet to reduce spam.

Leave a Reply Cancel reply. In the demo I chose to use only stored PDFs to keep the example simple.

As a side note, I had records which all had PDFs which I needed to combine into a single file for printing. This solution produce the page PDF quickly and flawlessly.

With the demo working, I imported the script into my file and made the appropriate changes, again — the problem occurred, and the fix worked. Nice demo and good that it is cross platform. I would be interested in hearing if you notice any speed difference. Finally, at the risk of stating the obvious… this technique can just as easily be applied to a combination of native FileMaker generated outputs and existing stored PDFs.

While stepping through the script with the debugger, I found that a File Error was being displayed at line 62 — the Send Event script step. In a last ditch effort, I rebuilt that script step — simply reviewed all of the setting and saved it and then the script — I made no changes to what was originally coded.